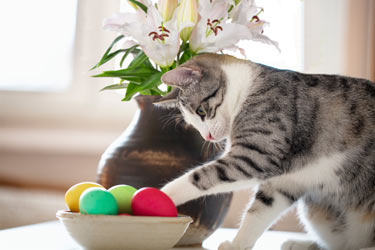 Easter is the holiday that marks the beginning of spring. The lovely Easter colors, foods, and festivities are definitely welcome after the long winter season. However, there are some Easter hazards for cats to be aware of during this special time. Don’t let your cats eat chocolate, and beware of them eating string-type objects such as Easter grass. Another Easter tradition to be conscious of if you have cats is decorating your home with Easter lilies.

Easter Lilies are Deadly to Cats

Lillium sp. and Hemerocallis sp. of lilies, including Easter, Asiatic, tiger, and day lilies are all incredibly toxic to cats. It is not known what causes this toxicity.

Ingesting any part of the Easter lily plant causes acute kidney failure in cats. This appears to be due to the death of kidney cells, but the exact mechanism by which it occurs is not known. Cats can be poisoned by Easter lilies in the following ways:

The following signs are seen in cats that are poisoned by Easter lilies:

Treatment of Lily Toxicity in Cats

If you know or even suspect that your cat may have ingested any part of a lily plant, take your cat and the plant, if you have it, to the veterinarian immediately.

The following therapies are all used to treat cats that have ingested lilies:

If treatment is delayed until eighteen hours or more have passed since ingestion of the lily, your cat’s prognosis for recovery decreases dramatically. When it is caught early and treated aggressively, lily toxicity usually carries a good prognosis for full recovery.

The above article was taken from: